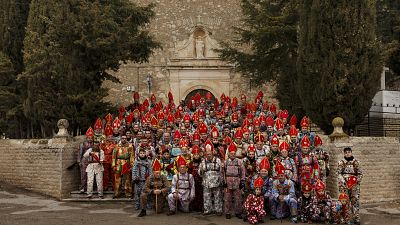 La Endiablada, translated as 'The Brotherhood of the Devils', is a tradition which has survived through the centuries and is held each year in the Spanish town of Almonacid del Marquesado (Cuenca, Castilla la Mancha).

In a country known for its abundance of weird and wonderful festivals, La Endiablada is unlike any other, featuring an incredible display of dancing, colourful costumes and noise, involving the entire community.

Members of the town’s religious brotherhood dress up in what they consider devil-like characters, donning vibrant jumpsuits and red miter hats.

There are two completely different explanations as to why this tradition takes place and these relate to the two main festivals, Virgin Candelaria and Saint Blas.

Candelaria, refers to the Jewish protocol, in which the Virgin Mary had to present her new baby, Jesus, to the temple, forty days after his birth.

In the Catholic calendar this took place at some point between 25 December and 2 February.

In the Catholic teachings, it is said that this action caused the Virgin Mary great anxiety and shame because of the public knowledge of the unusual circumstances of Jesus' birth.

The connection with the “diablos” of La Endiablada with their crude, outlandish costumes and their noisy bells are that they are said to be trying to divert the public's attention so that the Virgin Mary could fulfil her obligation and be protected from embarrassment and shame.

The connection of the dancing diablos to San Blas has another explanation.

According to the legend, a shepherd found a buried image of San Blas near Almonacid.

The people of Almonacid knew that their neighbours in Puebla de Almenara had already claimed the saint for themselves and so began a competition between the neighbouring villages over who had the true right to claim the saint as their own.

The saint miraculously resolved the dispute in favour of Almonacid and as a sign of their joy the shepherds rang the bells of their cattle giving La Endiablada its famous cowbells.

The centuries-old tradition takes place annually from 2 to 3 February.

Would you eat this 3D printed plant-based steak?

'Pam and Tommy': the story of the most infamous sex tape ever made