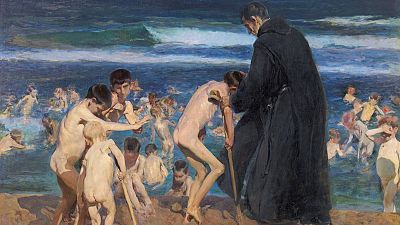 The Madrid museum dedicated to the paintings of the Joaquín Sorolla is encouraging its visitors to turn back time with a retrospective on childhood.

Opening on February 1, the collection, titled 'The Happy Age', bands together over 40 paintings and drawings that investigate the artist's relationship with growing up.

Known to some as the 'Master of Light', Sorolla's paintings made a distinct impression on Spain's art scene in the late 1800's.

His portraits always receive a special focus, many of which are featured in this new display.

Sorolla's art has toured the world in short-term exhibitions throughout New York, Paris, and London, but this location also happened to be his home.

Fresh eyes on the 'Master of Light'

Sorolla's art can be summed up in three fundamental concepts: the capture of the sea and the beach, especially in his native Valencia; the intense study of different lights and atmospheres; and his focus on children.

Depictions of childhood accompanied Sorolla throughout his artistic output and it was with his paintings featuring children – such as 'Triste Herencia' ('Sad Inheritance') – that he won his greatest success.

'Sad Inheritance', painted by Sorolla in 1899, depicts a group of children infected with polio bathing at the sea in Valencia, under the supervision of a monk.

The painting earned the Valencian artist his greatest official recognition, the Grand Prix and a medal of honour at the Universal Exhibition in Paris in 1900.

Curated by Sonia Martinez Requena and Covadonga Pitarch Angulo, the exhibition is divided into three sections: 'The centre of the family', 'The world of childhood' and 'The other childhood'.

Each part of the display focuses on a different set of unique emotions and experiences. From child labourers harvesting for their families to serene, maternal scenes.

In total, the collection features 41 canvases and 3 drawings completed by Sorolla – some of which are on public display for the first time since the early 20th century.

'The Happy Age' hits the Sorolla Museum on February 1. Check out the video above for a look inside.

How can you see Michelangelo's Sistine Chapel paintings in Madrid?