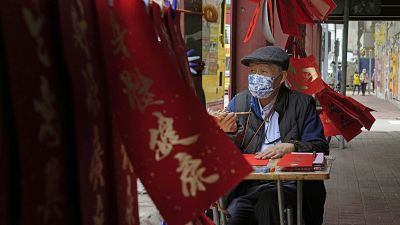 His easel is a tiny folding table where he plots delicate strokes on the traditional background of thin, red – making traditional decorations known as 'Fai Chun'.

Chan hangs his work on makeshift strings, selling them for 35 Hong Kong dollars (€4) each.

He has been crafting Chinese New Year calligraphy for over a decade, determined to preserve a dying tradition.

What is Fai Chun?

Fai Chun is a traditional decoration that is frequently used during Chinese New Year (otherwise known as Lunar New Year) and is usually celebrated for multiple days. This year, it starts on February 1.

Customers take the banners home and display them on and around the front door, and other doorways inside the home.

The colours and calligraphy evoke a feeling of celebration and warmth, perhaps like setting up and decorating a Christmas tree at home in other countries.

The decorations aim to invoke hopes of good luck, prosperity and happiness.

Many feature well-known phrases, some are more inventive, crafted to reflect the concerns of the times.

Chan has found the decoration adorned with "welcome spring and good fortune" is the most popular among customers.

Despite the popularity of Fai Chun, there has been a decline in the handwritten craft – mainly due to the convenience of mass-produced printed versions of the decorations.

Mass-produced decorations with ubiquitous red and gold themes, fill markets and shops all over Hong Kong during these few weeks before the Lunar New Year.

However, Chan is determined to preserve the handwritten craft, and believes that people still prefer the more traditional decorations.

Hong Kong people pay close attention to the style of writing Chinese characters, and it's not just a matter of which font is used.

Mastery of the brush, creativity, verve, and the detail of each stroke really are all appreciated, especially when it comes to auspicious Lunar New Year decorations.

Debbi Tsang a customer was instantly attracted by the beautiful handwriting of Chan King-fat.

"You can see this calligrapher's handwriting is really very beautiful. Now, it's really difficult to find someone who can still handwrite Fai Chun so beautifully. So, we would like to buy some to decorate our home," she says.

For seven consecutive years, Edith Ho and her husband Lee Ka-mong have set up their calligraphy pop-up before Lunar New Year on a steep stairway alley in the fashionable Sheung Wan district of Hong Kong.

They offer both traditional Chinese character 'Fai Chun' and others with creative, modern illustrations.

"I think that handwritten artworks always add a human touch, and it's something authentic. No matter how advanced the internet and printing are, those kinds of artwork still lack the originality of the artist of at the moment of creation," she adds.

Calligraphers like Chan, Ho, and Lee are few and far between, but they get respect for their individual efforts to keep alive well-loved traditions.

Check out the video above to watch Chan King-fat in his element.