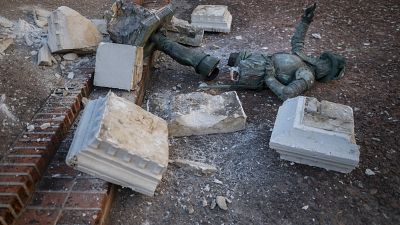 The statue has been controversial following protests inspired by anti-racist movements around the world   -   Copyright  Carlos Giusti/AP
By Tim Gallagher  with AP  •  Updated: 25/01/2022

A colonial-era statue has been toppled in Puerto Rico ahead of a visit by the Spanish monarch.

The incident happened hours before daylight on Monday in a precursor to the visit by King Felipe VI to the US Caribbean territory.

The broken statue was discovered by officers in the early hours after they heard a loud bang on an early morning patrol.

The statue of Spanish explorer Juan Ponce de León, made of melted-down steel from British cannons, showed León facing south with his left hand on his hip and right finger pointed toward the first settlement he founded.

The statue also points in the direction of the nearby San Juan Bautista Cathedral that holds Ponce de León's remains.

The Spanish explorer landed in Puerto Rico in 1493, accompanying Christopher Columbus. Ponce de León became the island's first governor and quelled an uprising by the native Tainos, a subgroup of the Arawak Indians, after forcing them into labour.

The statue has now been reinstalled after workers reinstated the 1,000 plus-pound (589-kilogram) figure a couple of hours after King Felipe arrived late Monday afternoon.

As they worked, the restoration crew were heckled by a handful of protesters, with some posting signs on the statue's base, one of which read, "They're not gods." Protesters said that they would topple it again and that a Christopher Columbus statue was next.

Spain's legacy is prominent across Puerto Rico, with a main road in San Juan named after Ponce de León and a colossal Columbus statue rising along the island's northern coast.

The Columbus statue is more than twice the size of the Statue of Liberty without its pedestal.

San Juan Mayor Miguel Romero defended the reinstallation in an interview with Telemundo Puerto Rico, saying, "The Spaniards from 500 years ago are not the same ones of today."

He later told reporters after the king arrived: "Freedom of expression is protected, but what cannot be protected is vandalism. I believe vandalism is the most cowardly form of expression."

Two years ago, activists marched through the streets of Old San Juan as they joined a U.S. movement to eradicate symbols of oppression and demanded that Spain's legacy in Puerto Rico be erased. While some statues have been defaced with graffiti, police said this is the first time such a statue was toppled.

The statue was in the Plaza San José, near the second oldest surviving Spanish church in the Americas, whose construction began by 1532 on land donated by Ponce de León and whose base was erected atop an Indigenous settlement.

King Felipe was scheduled to meet with Puerto Rico Governor Pedro Pierluisi and other officials to celebrate the 500th anniversary of the founding of San Juan.

Puerto Rico remained a Spanish colony until 1898 when Spain transferred the island to the United States at the end of the Spanish-American war.