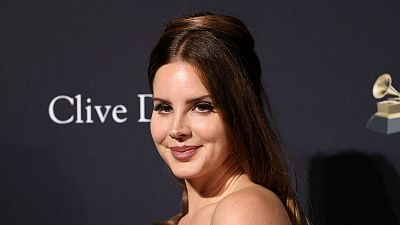 Del Rey recently received an Artist of the Decade award for her contribution to music   -   Copyright  AP/Mark Von Holden
By Tim Gallagher  with Reuters  •  Updated: 18/01/2022

Joy - and a little hysteria - greeted the news that Lana Del Rey is due to preview her new track “Watercolor eyes” on next week’s episode of popular teen-drama “Euphoria”.

The revelation was made on a preview of the episode, which will be the third of the new season.

Fans of the “West Coast” singer have been speculating that Del Rey has recorded a track for an episode of the hit HBO teen drama since earlier this month.

The episode, which airs on January 23, is now more hotly anticipated than usual; an impressive feat for the angsty, gen Z series which has gained a cult following for its right-on politics, edgy storylines and proliferate on-screen nudity.

Del Rey, 36, follows in the footsteps of Labrinth in having original material featured on the show, which boasts an ensemble cast brimming with contemporary young talent including Sydney Sweeney, Jacob Elordi, and “Spiderman” star Zendaya.

The “Dune” actress herself added her vocals to a version of Labrinth's ‘All For Us’ for the first series.

The show’s score is one of its defining features with Labrinth being made lead composer on season one by show-runner Sam Levinson who offered him the job while he was working on his 2019 album, “Imagination & the Misfit Kid”.

Del Rey recently admitted music is something she gets to do "in-between" her "poetry and "lovemaking".

Speaking as she was honoured with the Artist Of The Decade prize at Variety's Hitmakers awards show in November, she said: "I’ve been very lucky to follow my muse for the last 18 years, since I was 18.

"Sometimes that has taken me super far away from music into other mediums and other job opportunities that have nothing to do with the arts at all.

"I’m very flexible and what I’ve come to understand is that if you follow what you’re interested in, you’ll end up being the most creative in that field.

"Even if you get a 9-5 after you got the decade award, you need to do what feels right.

"I always like to say that the way I live my life is my poetry, my lovemaking is my legacy, and I get to make music in between.”

Her earlier albums, “Ultraviolence” and “Lust for Life” both peaked at no. 1 in the US album charts, and her “Euphoria” appearance comes a decade on from her first appearance on Saturday Night Live. Some fans were keen to reflect on her cultural significance over the last decade, and relished in her collaboration with the hit show.

Lana Del Rey releasing a song for Euphoria…. This makes perfect sense with my fantasy. Artist of the decade coming for another sad girl cultural reset iktr!

me on 23rd january looking at the faces of all lana del rey antis seeing that she served in euphoria and just like a decade ago she reformed pop culture and entered its pages as a pioneer of new branch of alternative music pic.twitter.com/HXBidhUj6N

Del Rey and "Euphoria" both have distinct aesthetics but they share their popularity with a dedicated, young fanbase, many of whom were vocal in response to the announcement.

I need the new Lana Del Rey song that’s on the trailer for the next episode of euphoria RIGHT NOW.

LANA DEL REY IS GOING TO HAVE A NEW SONG DEBUT ON EUPHORIA. EUPHORIA. pic.twitter.com/lcBTOXZy1B

Despite the critical success of Del Rey's albums she has never had a number 1 single in the US, something many are hoping will be remedied by her slot on "Euphoria". With its appeal to gen Z and TikTok influencers, appearance on the soundtrack will offer Del Rey massive potential for an increase in streaming.

When people watch euphoria and hear lana del rey’s new song and it goes viral on tiktok and she gets her first #1 pic.twitter.com/mZ2aqJlbyG

One thing is for sure, a crossover between an iconic pop diva and trending TV show is fruitful ground for meme makers.

Del Rey has courted controversy in the past with her remarks about other musicians and lyrics which some accused her of glamourising domestic violence, but her soulful lyrics have won her many fans. Next week will reveal the strength of her new single "Watercolor eyes".

Tu Bishvat: What is the Jewish holiday for trees?

The most international band you've ever seen

'A big responsibility': Ukraine's Eurovision entry is favourite to win

Why Britain should want to return the Parthenon Marbles