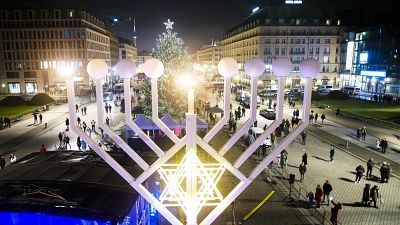 Hundreds of people in Berlin celebrated the start of the Jewish festival of Hanukkah on Sunday by lighting a giant menorah in front of the Brandenburg Gate.

A 32 feet high menorah lit in Berlin is believed to be the biggest in Europe, with its eight branched light structure.

The festival – celebrated by Jewish people the world over – lasts for eight days.

'A light against every form of exclusion'

The rabbi in charge of the event, Yehuda Teichtal, says it is a sign of Germany's renewal after the horrors of the Holocaust.

"We light the first candle as we say the past darkness of the times of the Holocaust are forever gone, and we will light a torch to the future of Jewish life, of positive tolerance in Germany and across Europe," he said.

Among the dignitaries attending the ceremony was the President of the Bundestag, Bärbel Bas.

She used Hannukah as an opportunity to reinforce the need to eliminate racism against Jewish people.

"No form of anti-semitism should be allowed to become acceptable," Bas said. "None is tolerable or excusable."

Check out the video above to see the lighting of the menorah.

'Most exciting Roman mosaic discovery in the UK' found under farmland