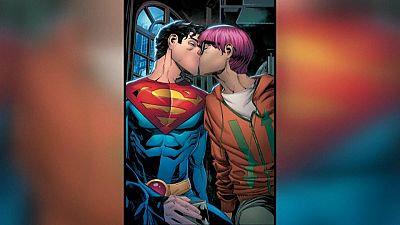 The new Superman will have a romantic relationship with a male character in an upcoming story to be published next month, DC Comics has announced.

Jon Kent – son of Clark Kent and Lois Lane – will get involved with reporter Jay Nakamura in the fictional series.

"The symbol of Superman has always stood for hope, truth, and justice. Today that symbol stands for something more. Today more people can see themselves in the comics' mightiest superhero."

The storyline line will feature in "Son of Kal-El" issue five, due to hit shelves on November 9.

Just like his father before him, Jon Kent is also a reporter, who struck up a friendship with a fellow reporter named Jay Nakamura in a story released in August.

Kent and Nakamura are seen kissing in an image published online by DC Comics on Monday.

"Following a scene where Superman mentally and physically burns out from trying to save everyone that he can, Jay is there to care for the Man of Steel," DC Comics said in a statement.

The coming out of America's most famous superhero comes as more comic books embrace diversity.

The latest Robin in the Batman comics came out as bisexual in August and 'Aquaman' introduced a Black, gay superhero earlier this summer.

Why are there so few Muslims in film and television?