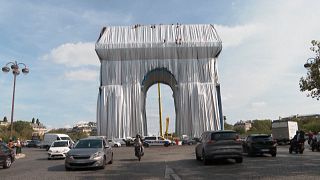 A first giant sheet of fabric was draped down the Arc de Triomphe in Paris on Sunday as work started to wrap the monument in a tribute to late artist Christo.

After weeks of preparations, the final stage of the art installation has begun, with a silver-blue sheet of recyclable polypropylene unfurled from the top of the imposing war memorial at the top of the Champs-Elysees.

Over the next few days, the entire Arc will be wrapped in 25,000 square metres (270,000 square feet) of fabric -- the signature of Bulgarian-born Christo, who died last year.

He had dreamed of sheathing the 50-metre-high monument since renting a nearby apartment in the 1960s.

But despite completing other major public works during his lifetime, including wrapping the oldest bridge in Paris in 1985 and the German parliament in 1995, the Arc de Triomphe project never materialised before his death.

It is due to be completed on Saturday, after which the protective barriers will be removed and the public allowed to get up close to the transformed monument.

The wrapping will then stay in place until October 3.

Canary Islands: Lava flows engulf houses on their way to the sea

Brazil: a mural made with the ashes of the Amazon

Rains and the emptying of a dam cause flooding in Thailand

Russian actor, director arrive back on earth from ISS