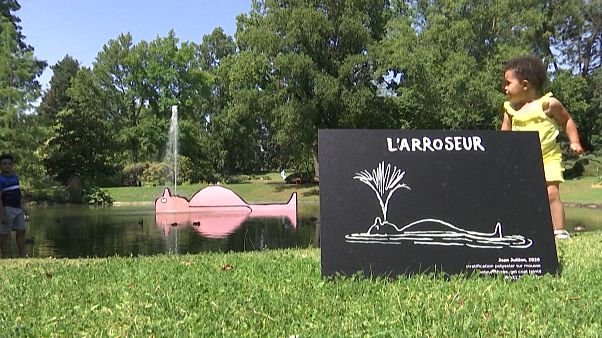 Contemporary art takes over city of Nantes in special exhibition

The French city of Nantes will transform into an art exhibition over the next two months, with a multitude of contemporary artists taking over the city.

It's part of the "Voyage to Nantes", an art exhibition that tries to show the city through the eyes of artists.

In one of the impressive art displays, water cascades down the facade of Nantes' Opera House. The water falling down the front of the opera house is a metaphor for the curtain of a theatre.

"The stage is actually the town. In other words, we try to show our city through the eyes of the artists," said Jean Blaise, the exhibition director.

In another area of the city, a four-poster bed floats in a canal. Two tramways in Nantes have been redesigned with black and white drawings.

"The advantage of 'Voyage to Nantes' is that everything is accessible...people who are always afraid, who hesitate to go into a gallery or a museum, well, it's open air most of the time, so there's no excuse and they can really allow themselves to go without being too afraid," said artist Evor.

Hondurans return to their homes ravaged by severe flooding

Madrid market's makeover after street festival moves due to COVID-19

Plane with first doses of CoronaVac vaccine lands in Brazil

Three killed in Uganda amid protests over arrest of Bobi Wine