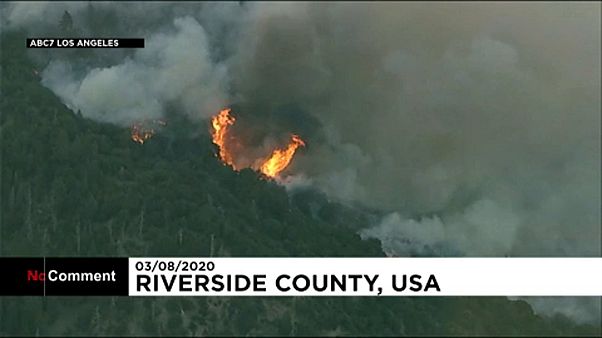 Firefighters have been battling a wildfire in Riverside County, California since it broke out on Friday evening.

The blaze has consumed more than 106 square kilometres of dry brush and timber and, as of Monday night, was only 7% contained, fire officials said.

Lisa Cox, a spokeswoman for the US Forest Service, said they had to allow flames from the so-called Apple Fire to run up the side of the 3,350-metre-high Mount San Gorgonio over concern for the fire crew's safety.

Thousands of people were forced to evacuate their homes.

The wildfire was sparked by a diesel vehicle that malfunctioned, local authorities said on Monday.

Chileans celebrate on streets after voting for new constitution

Hindu festival season scaled down due to coronavirus

The hotel inspired by Twenty Thousand Leagues Under the Sea

Protests in Italy as coronavirus curfews come into force

London's Chinatown is 'over the Moon' about its lantern installation

East Troublesome Fire continues to cause havoc in Colorado

Young doctors in Barcelona take off clothes to highlight concerns