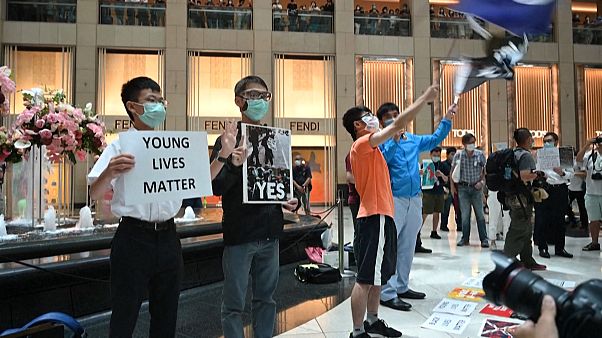 Protesters in Hong Kong mark one year since millions marched

A few hundred demonstrators held protests at malls in Hong Kong on the first anniversary of a demonstration of one million people against a bill that would have allowed extradition to mainland China.

The demonstration led to seven months of massive and violent protests with clashes between protesters and police becoming routine.

Organisers of last year's rallies called on the government to lift coronavirus restrictions on public gatherings.

Coronavirus bans on gatherings and a looming national security law has kept a lid on any return to city-wide unrest.

"After Hong Kongers spared no effort to resist, the Chinese Communist Party's persecution went to every length to force us to give in," said Jimmy Sham, from the Civil Human Rights front, a group that has organised protests. "This movement has not finished yet."

“Everyone has to learn their lesson, including the Hong Kong government,” Carrie Lam told reporters on Tuesday.

“Hong Kong cannot bear that kind of chaos, and the people of Hong Kong want a stable and peaceful environment to be able to live and work here happily.”

Belarusian women call for an end to police violence

Watch: Hundreds of dolphins 'stampede' off coast of California

Anger and sadness as Beirut marks one week since deadly explosion

Dozens of people arrested in Minsk on third night of protests