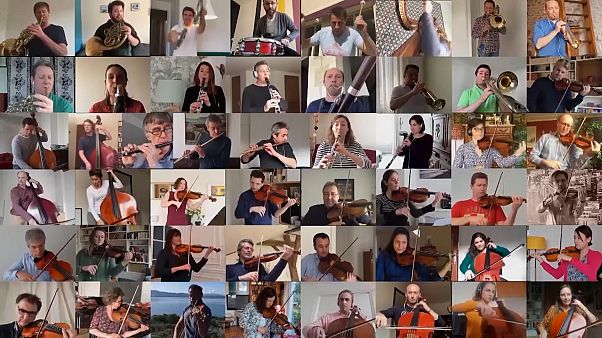 Hitting the right note: French orchestra plays on despite lockdown

They might be stuck at home amid a coronavirus lockdown, but that didn't musicians from the National Orchestra of France doing what they do best.

Like building a musical jigsaw puzzle, the orchestra used technology to weave together the sight and sounds of its musicians, who filmed themselves playing alone in their homes into a seamless, rousing whole.

The result? A stitched together performance of Boléro by French composer Maurice Ravel.

The video, posted on Sunday, has quickly racked up hundreds of thousands of views.

The performance starts with three musicians: a cellist, a violinist and a percussionist with "Stay home" written on his red drum.

A flutist joins, haunting, bewitching, seemingly playing in his lounge.

The musical tension and power builds as more and more join, until they are an orchestra of 50.

Kettle drum player Didier Benetti rearranged Ravel's work, chopping it down from the usual 15 minutes to a more manageable and social media-friendly length of just under four minutes.

The musicians got their scores by email. They also got an audio track to listen to through headphones as they played. That audio included a previous recording of the music and the ticking sound of a metronome, to help them keep time and stay in perfect unison despite being scattered to the winds.

The musicians filmed themselves over four days in the final week of March. One violinist played outside, with a beautiful seascape as his backdrop. Most of the others filmed themselves inside, making the performance feel particularly intimate. No black tie. The clothes were casual, with open shirts, T-shirts, jeans.

Venice's gondolas are back after Italy relaxes COVID-19 restrictions

Scuffles and shouting break out in Hong Kong's legislature

Hungary: Flashmob at the airport

Cafes reopen in Sarajevo after weeks of COVID-19 lockdown

Children have lessons in woods as parents protest school not reopening