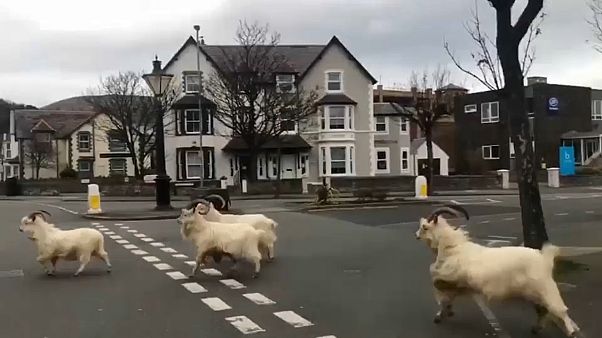 With humans confined to their homes, animals are taking advantage

With humans on lockdown across the world, animals have seemingly been getting bolder and venturing further afield.

In northern Wales, mountain goats have been captured strolling through the empty streets of Llandudno.

Andrew Stuart, a video producer for the Manchester Evening News, has been posting videos of the adventurers on his Twitter feed and they are racking up hundreds of thousands of views.

He said the goats normally keep largely to themselves, in a country park that butts up against Llandudno.

But now emboldened by the lack of people and cars, the long-horned animals are venturing deeper into the seaside town.

Meanwhile Wellington, a penguin at the Chicago Shedd Aquarium, came face to face with some beluga whales.

The aquarium, closed since March 13 because of the coronavirus outbreak, has been letting animals take "field trips" within the facility.

Venice's gondolas are back after Italy relaxes COVID-19 restrictions

Scuffles and shouting break out in Hong Kong's legislature

Hungary: Flashmob at the airport

Cafes reopen in Sarajevo after weeks of COVID-19 lockdown

Children have lessons in woods as parents protest school not reopening