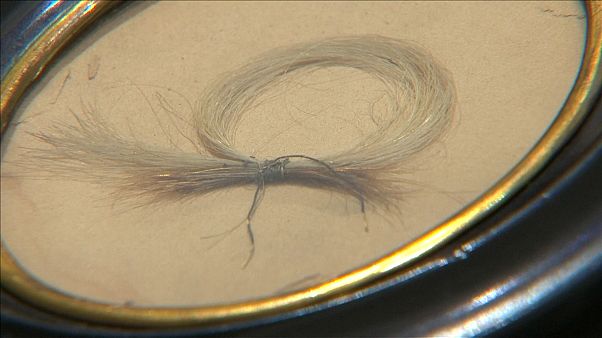 Lock of Beethoven's hair goes up for auction

A lock of Beethoven's hair is expected to fetch more than £15,000 at auction.

The lock was given by Beethoven to a collaborator, pianist Anton Halm, after the composer's servants had initially tried to fob Halm off with goat's hair.

When Beethoven found out, he was outraged, according to Sotheby's Director of Books and Manuscripts, Simon Maguire. "He then gave him, in a piece of paper, a lock of hair that he had just himself cut from the back of his head, a substantial lock. And he said this one at least you can be sure is genuine."

Scientific tests were carried out on the lock of hair some ten years ago, Maguire said, which indicated that the lock came from the same time period as the other lock of Beethoven's hair which was taken at his deathbed and sold some 20 years ago.

Locks of famous people's hair, a common collectors' item back in the day, were often divided into a few strands as they were handed down, Maguire explained. This lock, however, not only has a "substantial early story," but is "quite a substantial lock," Maguire said.